The story that can’t be told. Yet…

Posted by Cauldrons and Cupcakes

Writing is important to me.  I didn’t realise how much until I nearly croaked it a few years ago. My life, in that instant, boiled down to two priorities, and one of those was writing. 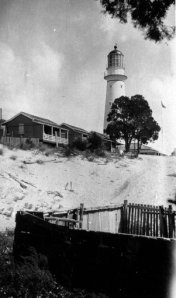 A long time ago I sat  in a partly-completed resort on Fraser Island. It was a wild and woolly Friday night. Most of the construction team had gone off-island while they still could. While storms lashed the bay I cocooned myself in my quarters with a book, hoping to learn more of the island’s history.

It was there I first acquainted myself with a tale that fired my imagination – a true story of lighthouses, mystery and history.  Over the years I came back to this idea again and again, fictionalising it and writing snippets into a series of tatty notebooks. But I had no real clue as to how to make it grow from snippets to a full sized manuscript.

I put my lighthouse story away, and began another, managing about thirty thousand words.  This is the manuscript that later became Mapping the Heart – shortlisted for the 2011 Hachette/Queensland Writers Centre Manuscript Development Program. The novel is an examination of what defines us, what protects us, and who we are when that becomes stripped away.

Then, for reasons that I can no longer fathom, I began a third manuscript. Not my genre.  Not my style.  (This one, which eventually grew up to be Return to Honour, selected for the 2011 Hachette/Queensland Writers Centre Manuscript Development Program, is now jokingly referred to by my writing sistahs as the sex and bombs novel.) I progressed slowly, tortuously.  It was difficult to take what was in my head and make it measure up on paper.  I realised I needed help, and began casting around for some instruction.

QWC rides into my life shining a beacon of light…

I took myself off to the Queensland Writers Centre to do their Year of the Novel course with Dr Kim Wilkins.  Everyone else had just one manuscript to work with.  I of course, had three, plus a sheaf of half-begun ideas… Kim, in her wisdom, suggested I work solely on Return to Honour, and that is where I finally cut my writerly baby-teeth. I might add that she is an awesome teacher, and without her guidance I would still be blathering around.

I came back to do Year of the Edit with Kim, then Sisters of the Pen was formed, and we seven ‘sistahs’ have been sharing and providing support on what can be a lonely journey ever since.

I wish I could say that I start one thing, bring it to an orderly conclusion, and then begin the next.

But that would be patently untrue.

I am a shambolic creative. I am in words up to my armpits, and my life is shaped by writing. It is my greatest joy, my most profound love, and my number one aggravation.

As it stands this is where I am today, three years after I finally committed to this writing life, and two after I began to take it seriously:

There have been three significant turning points for me as a writer.  The first was becoming an active member of the Queensland Writers Centre.  I often joke that I should have a t-shirt made that reads WRITER on the front and MADE BY QWC on the reverse. The second was finding my tribe, this wonderful group of sistahs who care about writing and each other and make the journey better on the days when it is fraught and hard. The third was the experience afforded to me by the Hachette/Queensland Writers Centre Manuscript Development Program. That generous program allowed me to walk away knowing in my heart that I AM a writer, and that I CAN write.

With that faith I trust that one day I will have the skills to write the first story my Muse ever whispered in my ear.  I pray I shall not disappoint her.